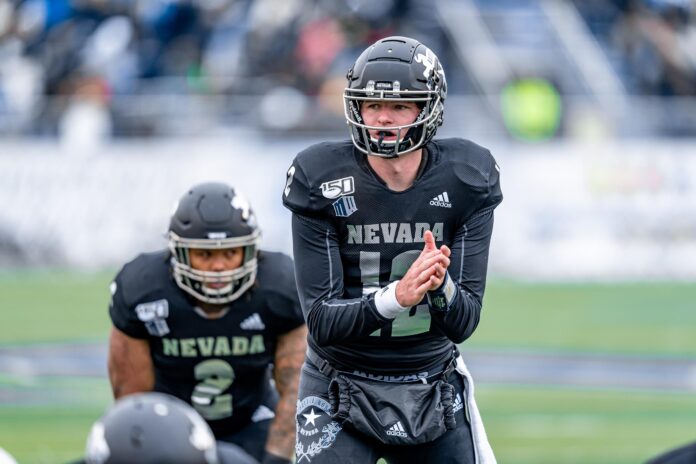 Today we are analyzing Carson Strong, Nevada’s 6’4″ 215 lb. rising star quarterback who was Mountain West Offensive Player of the Year in 2020. I am aware that fellow scout Alex Greb released a report on him on this website a few weeks ago, but I will be putting out my own report for each top quarterback prospect even if he has too so that you can compare and enjoy multiple perspectives!

Strengths: Strong’s best attribute is his elite arm strength, which elevates his game in numerous ways. He throws a beautiful deep ball, effortlessly launching it with impressive touch and anticipation to regularly drop it in the bucket to a receiver in stride 50 yards out. This explosive arm talent gives him serious NFL potential in the right system. Strong’s arm strength also means he throws the ball with a lot of zip, combining that with a tight release to get the ball to his target very quickly and efficiently. Even though Nevada’s Air Raid offense features a lot of screens and deep shots, Strong has shown he is capable of making tight window throws over the middle of the field with zip and accuracy. Overall, Strong is decently accurate across the field and certainly flashes great ball placement that could become more consistent in the future. He shows great ball placement and touch on back-shoulder throws in the end zone for example. Strong keeps his eyes downfield against pressure and often climbs the pocket well as it collapses to deliver a throw. At this stage of his career, Strong already shows solid ability to go through his progressions. He was also tasked with responsibilities at the line of scrimmage, routinely making checks pre-snap. Already as a sophomore, Strong was selected by his teammates as one of Nevada’s four captains.

Weaknesses/Areas to Improve: Like many young quarterbacks, Strong needs to get better at sensing pressure and getting the ball out early enough. He needs to learn to throw the ball away sometimes and live to see the next play, as he takes unnecessary sacks when he doesn’t do so. Strong also has subpar ball security in the pocket as a result, as defenders can come in from his blind side or from behind and bring him down while attempting to strip him of the ball as well. Additionally, while Strong climbs the pocket well against pressure sometimes, he also drops back farther and farther at other times, retreating over ten yards downfield and getting himself in trouble for a big loss when he does so. As a thrower, Strong is accurate but could still improve in this area. Some throws are too strong, almost as if he hasn’t yet mastered how to control his arm strength. Others can be too short, which can turn deep shots that should be breakaway touchdowns into contested catches. Strong can dangerously throw into double coverage inadvertently at times, getting baited by a safety. While Strong is fairly mobile, he is not really a gifted athlete and lacks explosiveness.

Bottom Line: Strong’s cannon of an arm gifts him with serious NFL potential, as his deep ball ability is truly game-breaking. Given his limited athleticism, he will be a pocket passer in the NFL, meaning it is extremely important that he keeps improving his current flaws such as sensing pressure, getting the ball out quickly, gaining consistency in ball placement, and reading coverages. Strong did improve these things throughout the 2020 season, which leads me to believe he should be able to take another much-needed jump forward in 2021 and cement himself as a first round talent.

Once again, our interview with Carson Strong’s star tight end Cole Turner is available on Bold Take Scouting which you can find on YouTube, Spotify, and Apple Podcasts! Strong is discussed on the interview so make sure to check it out.