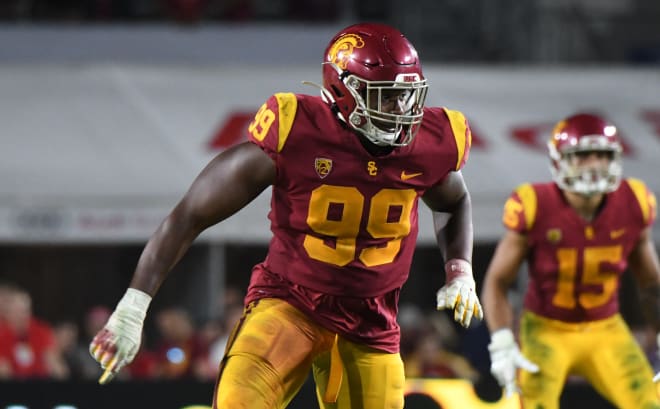 Strengths: Jackson is a quality athlete. His 40 speed is rumored to be in the 4.5s and it shows in the open field, where he is capable of chasing down ball carriers. Jackson’s quickness and lateral agility are of high level as well, allowing him to dance around the line of scrimmage to find a gap. Although he isn’t the biggest defensive lineman, Jackson is still powerful and sets the edge well against the run, flashing a really good stack and shed ability. He has good pop in his hands and combines this strength with his length to win a lot of reps by overpowering his opponent. Jackson’s use of pass rush moves is yet to become consistent, but he certainly has several effective moves in his arsenal, including a lethal spin move. When Jackson combines his natural strength with a well-executed pass rushing move, he wins the rep at a high rate. He also plays with a hot motor and often uses his effort to make a play late in the rep. Jackson’s best trait may be his versatility. He has played both defensive end and outside linebacker for USC, showing he is capable of lining up standing up or with his hand in the dirt. He has even been used in man coverage, which highlights his diverse skill set and athletic profile that makes him very comfortable in space.

Weaknesses: Jackson often wins with power by controlling his opponent, but as a lighter edge rusher he won’t be able to do so at a high rate in the NFL. Thus, Jackson needs to get more out of his athleticism as a pass rusher and gain consistency in deploying his pass rush moves. He often goes into the rep without a pass rush plan, relying purely on his strength, which can lead to him being stalled and his athleticism not going to good use. Standing up too tall in his rush and lacking inside placement also lead to him being locked up sometimes. Rectifying these issues and gaining in consistency by doing so are important for Jackson in 2021. Although Jackson is a terrific athlete, he does not have great bend at the top of his rush, which lowers his pass rush ceiling and increases the importance of consistently beating his blocker with refined pass rush moves. While Jackson has the natural strength and effort to set the edge well in the run game, his recognition of the play and his understanding of run fits are currently lacking. He often penetrates too early, abandoning his gap. He also has tunnel vision on his blocker sometimes, losing sight of the football. Additionally, Jackson is too inconsistent as a tackler and needs to eliminate missed tackles from his game.

Bottom Line: Jackson’s speed, versatility, and impact on several phases of the game will intrigue NFL teams for good reason. However, Jackson needs to evolve his game in 2021 to ensure a smooth transition to NFL success. He currently relies too much on winning with power, which won’t work often in the NFL, and needs to gain consistency in utilizing his athleticism and his pass rush moves. Jackson’s awareness and discipline in the run game, as well as his tackling, are also points to improve on in 2021. If he can make strides in these areas this season, Jackson will be a very interesting prospect presenting NFL teams with a complete game that can make him a high-level edge defender at the next level, but he needs to improve in the afore-mentioned ways in order to reach that.