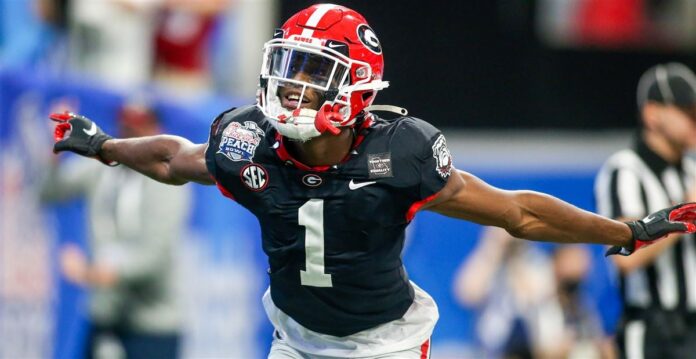 While week 1 of the 2021 college football season is in the books, there is one player who unfortunately could not be on the field but is fully worthy of being included in this First Look series. That is Georgia’s 6’3″ 190 lb. wide receiver George Pickens, who is currently recovering from a torn ACL suffered in March of 2021. Let’s check out the tape for a player we would have loved to see against Clemson this past Saturday!

Strengths: Pickens offers good size, and uses it well to shield defensive backs with his body and position himself well to make the catch. His best attribute is his elite ability with the ball in the air, where he absolutely dominates at the catch point. Pickens has fantastic body control, showing the ability to locate the ball and adjust as needed while contorting himself in the air, all the while having great sideline awareness to make sure to stay in bounds. He makes 50/50 balls 80/20 in his favor and has a collection of circus catches on his resume. Pickens is a solid athlete who is quick off the line of scrimmage and has some speed to threaten vertically, where he can get a step on the defensive back. Pickens offers some inside/outside vertically, as he excels playing on the boundary but can also offer a nice size advantage against nickels in the slot and can work the middle of the field decently well. Pickens does well to find the soft spots in coverage. He is very good on comeback routes, using his body to make sure the receiver is behind his back in these situations. Pickens is a willing and effective blocker.

Weaknesses: Pickens is not an elite separator. His route running is inconsistent, as it often lacks crispness and he is yet to truly learn the nuances of separating with his routes. While Pickens is a good athlete, he does not have extremely sudden quickness or blazing deep speed to consistently separate with his athletic skills either. Pickens only had two games over 100 yards this season, and was held under 55 yards four times. When teams respected his ability at the catch point and covered him with quality, tight man coverage, Pickens produced disappointing outings. Pickens tore his ACL in March, making it highly possible that he misses the whole season. Should he declare for the 2022 NFL Draft, this will be a major concern as teams might not have seen him back on the field post-injury.

Bottom Line: Pickens is an intriguing receiver who dominates on jump balls and has the athletic skills to improve as a route runner. However, his torn ACL throws a wrench in his ascension as one of college football’s top receivers, and I believe he would be better served returning to school for the 2022 season, especially if he does not return to play in 2021. For a receiver whose route running and ability to separate was still a work in progress, it is crucial that he not only returns from injury and shows that he has not lost any athleticism because of it, but that he takes another step forward in his game before eventually declaring for the draft. Pickens could be a value pick in 2022 should he declare and if the injury has not taken away from his athleticism or play level, but I think he would be a much safer pick, a better player, and a higher selection if he returned to school for the 2022 season and subsequently entered the 2023 NFL Draft.

Make sure to tune into the Bold Take Scouting podcast live on our YouTube at 8 p.m. ET on Tuesday to catch our rookie of the year predictions, as well as which rookies we see surprising and which we see disappointing!