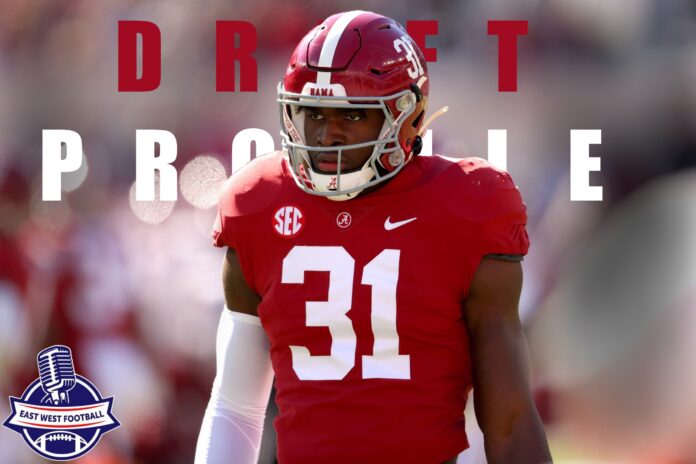 Looking ahead to the 2023 NFL draft, the consensus number one prospect seems to be Alabama Edge Will Anderson Jr. for now. He just wrapped up his sophomore campaign with the Crimson Tide, finishing with an incredible 101 total tackles, 17.5 sacks, and 31 tackles for loss. In just 15 games, Anderson certainly put up “1st overall pick” type numbers, but a deep dive into his film is the true test to see what kind of talent he has.

Anderson has a great frame and is an elite run-defender with outstanding hands. He is excellent at shedding run blocks which is incredibly rare for a player his age. Anderson uses his quick hands, a good jump off the line of scrimmage, and impressive lower body strength to get leverage on his blocker and throw him off his axis very early in the play. He is an incredibly intelligent player that has enough athletic ability to not need a wide variety of pass rush moves at the college level. He played the majority of his snaps in a 3 or 4-point stance, but his reps as a more traditional stand-up 3-4 Edge showed that he was flexible and had enough bend to warrant playing him at that position at the next level.

While he is dominant in many aspects, Anderson isn’t an all-around elite athlete. His straight-line speed and lack of pass rush moves are his two biggest weaknesses. He gets a large number of his sacks off of stunts or missed blocking assignments. He struggles in pursuit due to his speed and has a surprisingly average motor at times that shows up when plays are run to the opposite side of the field to him. There were multiple instances where he begins jogging or even just standing around when the play is going away from him. Also, like any college player, he could still improve his upper body strength and add more muscle to his currently undersized weight for the position.

Anderson’s potential is unquestionable. In a 3-4 scheme with proper pass rush technique taught to him, he could develop into an elite edge rusher in the NFL. He needs to add more strength to be usable on all three downs at the next level but already possesses outstanding abilities against the run. He has quick hands and a great frame that should help him excel but his straight-line speed and pursuit leave a lot to be desired. He is an excellent tackler that isn’t afraid to lower his shoulder to lay a big hit. Once his hands are on a runner, he seldom gives up extra yardage. He knows how to occupy multiple blockers to free up a teammate but struggles more versus offensive linemen with size. While he isn’t a complete player yet, he could develop into an elite 3-4 OLB in both the run and pass with proper coaching 3 to 4 years down the line. Heading into the 2023 Draft, Anderson should be a lock as a top 10 pick, with serious potential to land within the top 5.