Kenneth Walker III gets around the outside and puts the Seahawks on the board 🙌pic.twitter.com/QNXz3A6L4t

The Offensive Rookie of the Year award was a tough call this year. A few wide receivers performed great in struggling offenses, but we ultimately chose Walker. He began the season as the backup to Rashaad Penny, who went down with an injury in Week 5 against the New Orleans Saints. Walker became the starting running back and immediately experienced one of the most significant mid-season rookie breakouts in recent memory, playing a big role in the Seahawks going 4-0 in his first four starts after starting 2-3 and eventually clinching a playoff berth. Walker carried the ball 228 times for 1,050 yards and nine touchdowns over the course of the season, in addition to recording 27 receptions for 165 yards. He displayed great burst and speed which afford him the ability to consistently make big plays. Walker’s production was extremely impressive, especially considering he was not the starter until Week 6, and his play once he became the starter elevated the Seahawks’ offense.

Garrett Wilson played extremely well in spite of having three different starting quarterbacks this season, proving that he is the Jets WR1 of the future while he caught 83 passes for 1,103 yards and four touchdowns.

Chris Olave put his speed on display and proved to be a more than dangerous deep threat this season for the Saints, despite poor quarterback play, as he reeled in 72 catches for 1,042 yards and four touchdowns.

Jets CB Sauce Gardner as a rookie:
🔒 1st team All Pro: first rookie CB to do so in 41 years
🔒 Pro Bowl pick
🔒 Led NFL in pass breakups with 20
🔒 Allowed 1 TD pass all season (didn’t allow a single TD in college)

Sauce Gardner led all rookies this year in our Rookie of the Week awards, being named a winner twice and a runner-up seven times, and could have easily been made a runner-up a few more times. His dominance as a rookie makes him our Defensive Rookie of the Year in a tight race with Tariq Woolen. Gardner displayed exceptional talent from Week 1, paying immediate dividends as the fourth overall pick. He was named a Pro-Bowler and a First-Team All-Pro, the first time in 41 years a rookie cornerback has been given that honor. His movement skills and football IQ allowed him to blanket nearly every receiver he covered while rarely being targeted by opposing quarterbacks, despite covering teams’ WR1s. His long arms allowed him to break up passes like no other cornerback could, as he recorded two interceptions and led the league with 20 pass breakups. His long strides and speed allowed him to make up ground and close on the ball quickly, and his physical nature helped stifle wide receivers off the line in press coverage and helped him make an impact in the run game, as he totaled 75 tackles. Gardner played a major role in turning around a Jets defense that ranked last in total defense last year to seventh this year.

Woolen would have been the runaway Defensive Rookie of the Year in most years. The 6’4” athletic phenom is already one of the best cornerbacks and top ballhawks in the league, having recorded a league-high six interceptions and 16 pass breakups in 2022.

The second overall pick, who stayed in his home state of Michigan to play for the Lions, wasn’t just a feel-good story, as he wreaked havoc on opposing offensive lines, recording 9.5 sacks on the season while also impressively producing three interceptions. 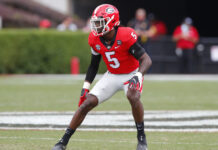