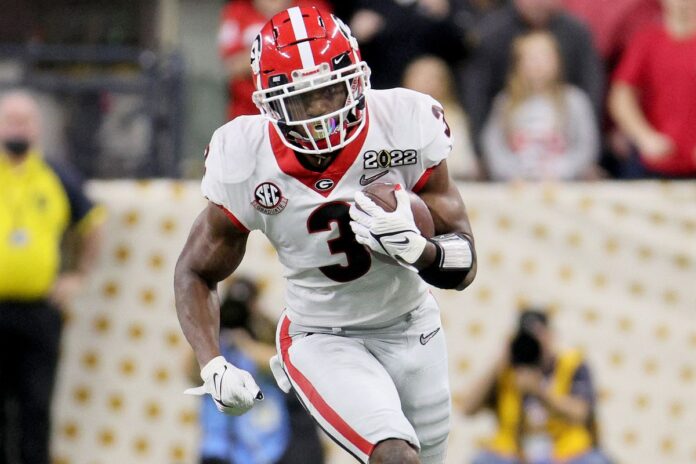 There are multiple running backs from this 2022 NFL Draft class that I expect to become starters for their teams as rookies, including the Jets’ Breece Hall and the Seahawks’ Kenneth Walker. While these two players were both top fifty selections, I believe another running back drafted on Day 3 will grab hold of the starting job for his team by the end of the season. That would be Georgia’s Zamir White, who the Raiders selected in the fourth round with the 122nd pick. I believe White might be the best pure runner on the Raiders’ roster currently. He blends vision, burst, contact balance, toughness, and a tendency to fall forward constantly. Additionally, he has been reported to have a great work ethic and was a captain at Georgia. Learning this increased my confidence in him becoming the Raiders’ starter by the end of the 2022 season. Of course, the Raiders’ backfield won’t be easy to break into. Josh Jacobs was a first-round pick in 2019 and has had two 1000-yard rushing seasons. Kenyan Drake is a useful and experienced backup, and the team also brought in veterans Brandon Bolden and Ameer Abdullah. However, the only one in this group who is under contract in 2023 is Bolden, and he shouldn’t be in the mix for the starting job. Now led by General Manager Dave Ziegler and Head Coach Josh McDaniels, the Raiders seem to be attempting to move on from the previous regime’s choices at the position, which was made especially clear when they declined to pick up Jacobs’ contract option. Jacobs is a solid player, but the past two years have been more marked by volume than efficiency for him. He averaged 3.9 yards per carry in 2020 and 4.0 in 2021. These are good numbers but not exceptional. By the end of the season, when the coaching staff has had months to let White’s impressive running influence their allocation of touches, I believe they will hand the starting job to the running back who best profiles as their starter beyond 2022: Zamir White. He might even earn the job outside of the ramifications for the future as well. He went as low as he did in the draft because of his lack of receiving production, though Josh McDaniels typically gives third-down reps to a different running back than his starter and it is worth noting that James Cook, the best receiving running back in the draft, was his teammate in Georgia’s backfield. As a result, we could see a latter part of the season in which White is the starting running back for the Raiders and Jacobs is relegated to mainly third-down duties. Don’t sleep on the man they nickname Zeus!