Jalen Carter from an overall interior dominance standpoint is the most talented defensive tackle I’ve seen coming out of college since Chris Jones in 2016. He possesses a rare combination of size/athleticism/power that makes him a nightmare to gameplan for considering he can show up over center, 1-tech, or 3-tech, and at the next level. I can even see him getting pass-rush snaps at the 4 and 5 as well. Carter’s just that impressive of an athlete on the field! He’s a real difference-maker on the inside and creates a lot of opportunities for his teammates to make plays. While I do believe Carter has some value within a 3-4 odd, I believe his best situation could be lining up at 3-tech in a 4-3, or 2i in a 4-6. 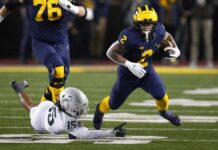