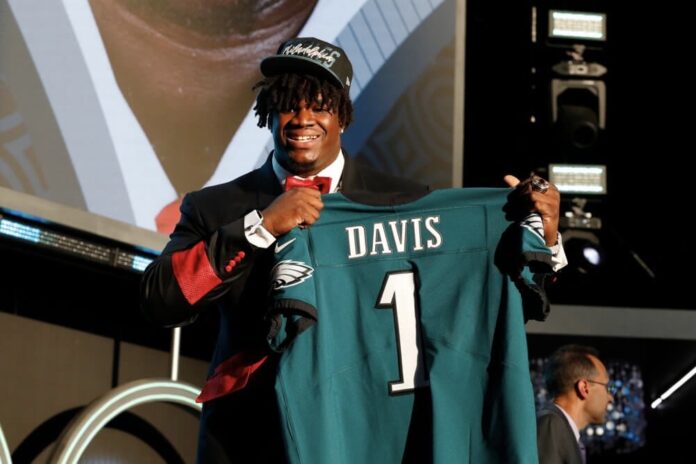 Heading into his final season as a Georgia Bulldog, Jordan Davis found himself on the outside looking in with regards to most Big Boards and Mock Drafts. Davis was branded as a 0-Technique solely that was not athletic enough, nor would he ever manage to get his physique into the type of frame NFL GMs wanted to see from a projected 1st Round Defensive Tackle. During the 2021 season, not only did Davis display his unique versatility within Kirby Smart’s 4-3 Front, but he also showed up in the best physical condition of his entire time at UGA.

At 341 pounds, his 40-yard dash was faster than Patrick Mahomes, Nick Bosa and JJ Watt's 😳

Georgia's Jordan Davis is on a mission to prove he is unlike any other player in this year's draft. pic.twitter.com/WIZNKBstrz

By the time the 2021 season had ended, Davis was a National Champion, the unquestioned anchor of a historical defense, and had also seen his draft stock rise considerably. Davis however wasn’t done impressing his once doubters when he put on one of the greatest NFL Combine performances in the history of the event by an athlete of his stature. His straight-line speed, short area quickness, and ability to get out in space and move were put on display. After that eye-dropping weekend at Lucas Oil, Jordan was now hearing his name thrown around as possibly a top-15 pick in April’s draft, which was a far cry from where he started at the beginning of 2021.

With the No. 13 overall pick, the #Eagles select DT JORDAN DAVIS (Georgia)‼️

The Philadelphia Eagles were sold enough on Davis to take him 13th Overall and prepare him to be the future centerpiece and building block of their defense. He’s already shined in Rookie OTA’s, and with training camp only a week-plus away, Eagles Fans and the organization as a whole have a lot to be excited about. The city of “Brotherly Love” is no stranger to outstanding defensive line play considering they’ve cheered for the likes of Jerome Brown, Corey Simon, Reggie White, Fletcher Cox, and Darwin Walker (just to name a few). But Davis is nothing like the previous greats that he has to follow. He is his own entity that combines some of the best traits of most of them.

Imagine Reggie’s size but 35 lbs heavier, Corey Simon’s athleticism and short-area quickness, Walker’s ability to push the pocket, and Brown’s power against the run. Heavy praise for a rookie who hasn’t played one NFL down, but he’s also being groomed and mentored by maybe the best of them all (as an Eagle), and that’s Fletcher Cox. Cox has been the voice and best player on that eagles’ defense for the better part of the past decade but has been slowed to a crawl recently over the past couple of seasons due to injuries. While Fletcher was used more as a 2 or 3 Tech, he could also apply pressure to the QB from over Center, which is where I expect Davis to see a large number of his snaps.

He’ll be playing in the Eagles Base 4-3, which will require him to not only stop the run, but also man 2 gaps, and periodically rush the passer from the interior. All aspects of line play that Cox has thrived in and can potentially pass onto Davis. Being insulated by a core of long-time productive veterans like Brandon Graham, Javon Hargrave, and Derek Barnett are also likely to help ease his transition into a new league and system. In conclusion, I don’t foresee Davis ever becoming a 12-15 sack type of defensive tackle, but what he could evolve into is a 6-10 sack player, that completely shuts down the run, and frees up everyone else within the front 7 to make plays and stay productive. Only time will tell if my considerations originate, but for the moment, they definitely bear resemblances to a story that I have read time and time again.