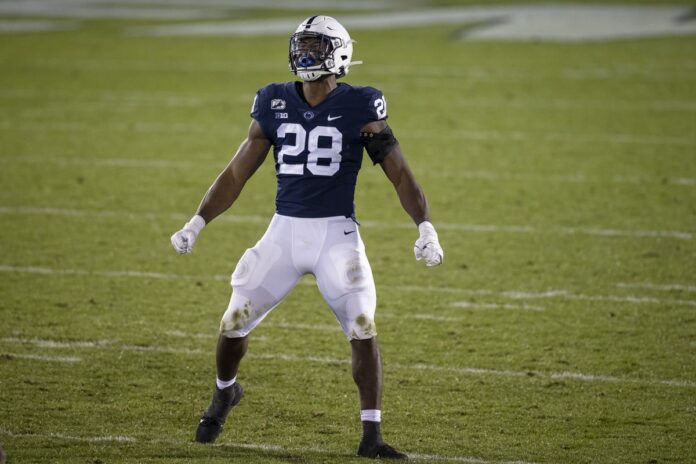 Strengths: Oweh’s selling card is not his tape, but rather his incredible testing numbers that he produced at his pro day. His workout was headlined by his 40 time, which clocked in at an unreal 4.38 for a 256 pound defensive end. On the field, his speed is evident in pursuit, and he is in general a gifted athlete in space, possessing easy change of direction and impressive burst. Oweh is overall a very smooth mover. He also flashes some functional strength, which allows him to display dangerous speed to power as a pass rusher at times, pushing his man back in the pocket to generate pressure. Oweh shows flashes of successful block shedding as well.

Weaknesses: Oweh is an extremely raw player with a lot of development ahead of him. He is below-average against the run, since he is slightly undersized and can get moved by larger offensive linemen at the point of attack. His instincts in the run game are also subpar. As a pass rusher, Oweh relies on his athleticism too much. He often stands up too tall, giving up leverage. He also rarely shows a rush plan, pass rush moves, or counters. While Oweh flashes impressive speed to power ability on the edge, it is rare to see him bending around the edge and flattening to the quarterback. As a result, Oweh’s sack production is extremely low, recording five sacks in 2019 but none in 2020. He will need to drastically improve his finishing in the NFL, as well as his technique as a pass rusher.

Bottom Line: Oweh’s absolutely freakish athletic profile, particularly through the lens of his testing numbers, will make many defensive coaches salivate. However, he is nowhere near a finished product and will take a lot of patience and development as he adds weight, develops instincts, learns to rush the passer with a plan and moves, and improves his finishing ability. Oweh is oozing with upside, but he will likely start out as a situational pass rusher and only time will tell if he will be able to develop properly and reach his very high upside.

Grade: 2.5 (indicative of a mid-second round grade)